But Think Of The Children! 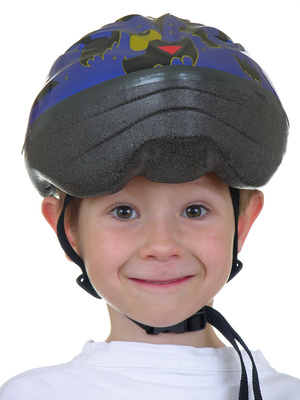 Better than no helmet…?

The death of any child is a tragedy regardless of cause but no matter what we do children will continue to die prematurely despite the rhetoric. In the 5 year period between 1999-2003, 286 children died from an entirely preventable cause …drowning (half of these were in swimming pools).

How many child cyclists died over a similar period? Take a guess and read on…

The number of permanently injured and brain injured children as a result of surviving these ‘accidents’ are difficult to find but it is likely that they are higher still. Yet strangely, neither of these statistics make people view the backyard pool or family car any differently. Quite the opposite in fact, with sales of SUVs and personal pools growing.

One of the reasons why people (usually non-cycling citizens) feel that bicycle helmets should be mandatory for adults and children is that they believe that by forcing adults to wear them, it sets a good example for the children and they are therefore likely to comply. This is rather naive.

In addition to the fact that the child (particularly a teenager), out of parental view, is likely to remove the helmet no matter how ‘normal’ a parent makes it, there are other problems with their argument. Are there other things that the law restricts children, yet not adults, from doing? As a matter of fact, there are.

Children can not legally drink alcohol, smoke, have sex, vote, own a firearm, drive a motor vehicle or fly an aircraft. Adults can legally do all of these things yet I don’t see anyone changing such behaviour ‘for the good of the children’ as it might ‘set a bad example’.

It would be wrong to suggest that a relaxation of the helmet law is the same as actively increasing the risk to our children’s safety – it’s likely that they’ll be safer overall. There are far more important things to teach children about riding bicycles safely than to force them to wear safety gear – giving them (and their parents) a false sense of security.

So, back to your guess…

Between 1995-2000 there were a total of 61 child cyclist deaths – fewer than the number killed by the family car in their own driveway. Of these cyclist deaths:

What is the real problem here? Why do we insist on treating the symptoms and not the cause?

When the dutch were faced with these issues for their children’s safety they took a different approach entirely and as a result, all cyclists were safer.

If you still believe that children should wear helmets by law, that is fine, but rather than insisting that MHL remains unchanged for ALL citizens, why not edit our letters accordingly and send your views to Government. While you’re at it… you might want to ask Government why they insist on helmets for cyclists when our nations driveways remain unfenced!

If we do nothing, we can expect nothing in return. We deserve nothing more.