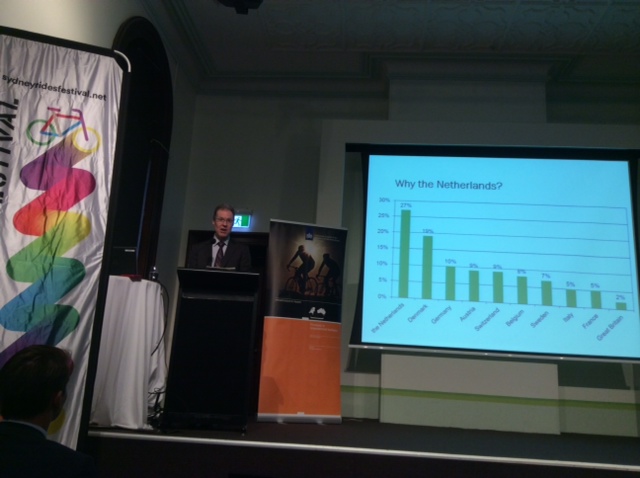 Reinventing the Wheel: How to become a cycling city

On Monday 13th October, as part of the Sydney Rides Festival (sydneyridesfestival.net), ‘Reinventing the Wheel: How to become a Cycling City’ was held at Customs House, Sydney.

The guest speaker, Aletta Koster, director of the Dutch Cycling Embassy, had recently hosted a tour of The Netherlands (in collaboration with the Consulate-General of the Netherlands in Sydney) for an Australian delegation some of whom you might not expect: delegates from the NRMA and the RACQ [Royal Automobile Club of Queensland] accompanied the usual suspects (Cycling Promotion Fund, Australian Bicycle Council, Bicycle NSW, City of Sydney, City of Parramatta, City of Port Phillip, City of Melbourne)).

Whilst in The Netherlands the delegates attended various workshops and were introduced to ‘Dutch cycling’ and the practical application of this for Australia.

It’s this sort of collaboration that is the best way for change to occur. It’s not only automobile club representatives who are amenable to change but cyclists, too!

Here are some highlights from the presentations.

Attendees at the Reinventing the Wheel talk, Customs House

Willem Cosijn, Consul-General of the Kingdom of the Netherlands opened the session.

The Netherlands has more bikes than people (90M+ v 80M) . Willem gave nod, in a diplomatic, amusing and C-G kinda way to the room for improvement that Sydney could undertake (e.g. easing traffic on Bondi Road, Military Road).

If the King and Queen of the Netherlands cycle daily, coming from the “top down’ is surely the way to go!

Willem Cosijn shows a picture of Queen Maxima and King Willem-Alexander on their bikes, part of their habitual mode of transport.

The Netherlands is the #1 country in the world to use the bicycle: there’s less noise, less stress and less traffic.

Bike lanes are comfortable. Even bicycle tunnels are appealing / light. There is a coherent system to follow; the bike lanes are direct (it’s quicker by bike than car for local trips) and it’s safe. The car is a guest.

We need a better transport system. The roads are there for buses and cyclists. We should work together and demand better bike lanes.

Atella thought the Dutch cycling revolution in the 1970s wouldn’t happen today- it happened at a time when there was much stronger civic direct action. She suggested it might be advisable to focus on the economic, social and environmental benefits of cycling. Tourism would be another key focus point to use. Don’t use emotion use economics!

Why do the Dutch cycle? They share a culture of equality. They don’t despise cars either, having one of the highest car ownership percentages  in Europe. However, they understand fitness for purpose and prefer bikes in urban areas.

Question time! From helmets, to the Australian Cyclists Party. From insurance to liability.

It would be good when there’s a time that the helmet issue isn’t even raised. At the moment helmets are the 5th most important reason given for not cycling.

To sum up? Well, the Netherlands is egalitarian so there isn’t the ‘us’ vs ‘them’ culture. There’s no stigma about riding a bicycle, on the contrary it’s normalised and kids ride up front on their parents’ handlebars when young, they ride their bikes to primary school. Cycling is normalised. In Australia we address cycling by regulating and restricting it when we should focus on enabling cycling which is coordinated at a national level in the Netherlands.