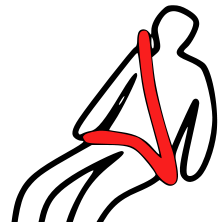 Campaigners for helmet choice are often asked “do you support seat belt laws”, as though this is relevant.  More relevant would be a question about laws forcing motor vehicle occupants to wear helmets, but somehow that subject isn’t of interest to medicos, law makers and others who profess to want to make our roads safer.

Seat belt law isn’t in our province of interest or knowledge, but what we do know is that there is no down-side to public health, better cities, resource depletion nor air pollution from making seat belts compulsory. Actually there might be a down-side to public health, because it’s possible that wearing seat belts encourages more dangerous driving, which increases risks for pedestrians and cyclists.  In contrast, bicycle helmet laws do reduce public health, do make cities’ roads and public transport more congested, do cause more fossil fuels to be burned which pollute the air with carcinogens and carbon dioxide. That’s because helmet laws discourage cycling.