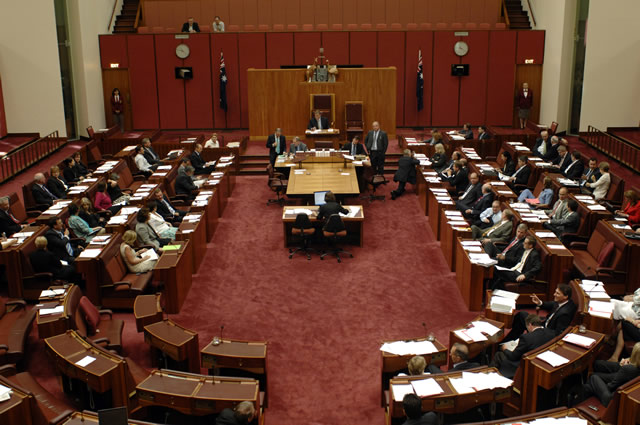 The Senate interim report on bicycle helmet laws (terms of reference (d) personal choice and community impacts) has finally been tabled. Eagerly awaited by anyone concerned with advancing Australian cycling beyond its current doldrums, it is disappointing to find that the report is best described as underwhelming, with the concluding recommendations frankly lame and unhelpful.

To summarise: The report itself does a reasonably good job of presenting the views of submitters, both for and against Mandatory Helmet Laws (MHLs). But there it ends. The report is framed as a “he said she said” rundown, with no attempt made to critique any point of view, nor any sign of independent research from the Senate to verify (or discount) the claims made by the many parties. What is lacking too is any overarching cohesive frame of reference, such as might give an idea of what the context of all this is. A context not only of cycling safety, but of participation, free choice, and a nationwide cycling culture, and what the effect of helmet laws can be seen as having had in these areas. Maybe I expected too much, but what we got in the end didn’t really add to any more than could be gleaned from reading the individual submissions. There was also little reference to the open public hearing, which did at the time give serious critique, particularly to the supporters of MHLs. It was there that it was really teased out that we do not have consistent reliable data on exposure (the amount and type of cycling done) in Australia, and that consequently the claims made for the benefits of MHLs are without solid supporting evidence.

So at the end of all this, like a lame appendix, came two recommendations. I’ll quote them in full:

“The committee recommends that a consistent and comprehensive national data set be established. The data set should provide nationally consistent information on cycling-related injury trends as well as cycling participation rates. The committee recommends that the Department of Health in cooperation with the Department of Infrastructure and Regional Development and state and territory counterparts develop the national data set for application across all states and territories.

4.16 The committee recognises that it is only once such nationally consistent information is gathered and assessed that a national assessment of the impact of mandatory helmet laws can be undertaken.

4.17 The committee recommends that the Department of Infrastructure and Regional Development in cooperation with the Department of Health conduct a national assessment of mandatory bicycle helmet laws once a national data set of sufficient quality has been established. The impact of the Northern Territory legislation should form an important part of the overall assessment. In addition to safety concerns, this assessment should consider the relationship between bicycle helmets and cycling participation rates, drawing on the experience of bike share schemes and other initiatives directed at improving cycling participation rates.”

So what does this amount to? Yet another call for further research and data collection. Its not as if we haven’t already had 25 years of data, however imperfect. And its not as if the rest of the world (with some good data in places) doesn’t exist, to give a comparison to Australia, the helmet law outlier. I wouldn’t hold my breath waiting for this data either. And have a look at who is going to collect the data, and evaluate MHLs on that basis, and be afraid. We have experienced so much policy based research in Australia already on MHLs that I doubt if these agencies will break the mould.

I guess on the positive side, the recommendations show that the committee isn’t satisfied that we have enough accurate data to make a decision one way or another on MHLs. My oh my. I thought every transport department in the country was convinced MHLs had been a great success – but it turns out they never had the data to know in the first place! So what does the committee do with this bombshell? Do they recommend that we call the police off and stop punishing and deterring cycling by allowing people the choice in helmet wearing, pending consideration of the mythical data set? Oh no, that would be unAustralian, where the default position if in doubt is to regulate, control and ban. So 25 years on, with the rest of the world laughing at us, we have to wait yet again for our freedom to choose. And what of the coterie of professional public health experts, who so confidently spruiked the overwhelming benefits of MHLs? If, as the committee clearly found, they don’t even have the data to support their claims, wouldn’t a little criticism be in order? Just a little?

I have read all the submissions to the enquiry, and attended the public hearing. It would be simply absurd to believe that there is not a serious problem in Australia’s go it alone world of mandatory helmet laws. So why did the enquiry lead to such feeble recommendations? For this information, I am indebted to Senator Leyonhjelm’s office.

Just a couple of week before the report was tabled, it included recommendations much in line with those made in the 2013 Queensland enquiry – namely significant relaxation in MHLs. This is exactly what one would have expected from the work of the committee in assessing the various submissions. But that’s not how it works.

There were six senators on the committee, and at least three, preferably four, would have had to agree to the recommendations. Well the two liberals were never going to agree, as they have a natural instinct for authoritarian control. One of them even went so far as to issue a dissenting report, considering the collection of further data to be a waste of money as he “notes that Australia enjoys some of the best cycling injury prevention rates in the world.” So that’s the liberals gone, as they obviously have privileged knowledge that doesn’t require any evidence.

What of labor? The problem labor had was that the labor states, especially Queensland, have policies supporting MHLs. And labor parliamentarians aren’t allowed to think for themselves, but only for their party. Yes, they couldn’t support relaxation of MHLs because that would make it hard for their state counterparts. Entrenched policy trumps evidence every time with labor.

So take your pick from Zig and Zag – policy based on revealed truth, or policy based on what won’t give trouble to your mates. Either way, I’m left wondering what these clowns actually think an enquiry is. I would have thought it involved collecting evidence, assessing evidence, and making appropriate recommendations based on that evidence. Not so Zig and Zag, where it seems to be a circus where you squander the goodwill, time and dedication of the public, waste public money, and end up pulling a rabbit out of your hat that says “I think what my mates think, and what benefits my party, and bugger the evidence”

So thanks to all those good people who gave of their time and wisdom to try and achieve positive change. Sorry it would seem to have been wasted. And don’t forget, your taxes paid for the public health professionals, the Senate committee members, and the Senators, so that they could give us their astonishing insights.