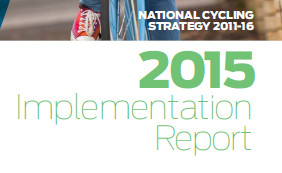 This is a guest post by Chris Gillham, who maintains http://www.cycle-helmets.com/, a rich repository of facts and statistics on Australia’s helmet law disaster.

A report on cycling promotion by the Australian Bicycle Council and Austroads will test whether the Australian or New Zealand governments are paying any attention to the cycling participation and safety obstacles created by their all-age mandatory helmet laws.

The report confirms the abject failure of the strategy and acknowledges that not only was there no increase in participation, there was a slight decrease from 2011 to 2015. Australia’s weekly cycling participation was down 0.8% from 18.2% in 2011 to 17.4% in 2015, representing about 187,000 fewer cyclists.

Governance of the National Cycling Strategy ranges from ministerial oversight in all Australian and NZ jurisdictions to all relevant government departments and agencies in both countries.

If any of them reads the report, they’ll find it itemises the 2011-16 strategy successes of improved infrastructure and more cycleways, along with promotional events and participation/safety campaigns by the different states.

All amounting to fewer people cycling and more being injured.

The report doesn’t say it explicitly but repeatedly suggests that helmet laws are an obstacle to participation and safety.

For example, the following is about a third of the report’s summary on road safety:

Despite more relaxed laws regarding footpath cycling and helmet use, the report found that the Northern Territory had the lowest proportion of both cycling fatalities and hospitalisations as a proportion of all traffic fatalities/crashes by jurisdiction in the period 2005-2014.

Are the ABC and Austroads giving a hint when they introduce their chapter on cycling promotion with the following?

An undue focus on safety and on the need for special safety precautions reduces the appeal of cycling and unfairly places the responsibility on the cyclist to protect themselves from external dangers.

In fact, trip per week changes in all Australian states resulted cumulatively in a 41.3% decline in national daily bike trips from 2011 to 2015.

That’s about 1.3 million fewer bike trips per day, confirming that Australian daily bicycle trips are way down on estimates from surveys before the 1990-92 introduction of bicycle helmet laws. Australia’s population increased 39.4% from 1990 to 2015.

The report notes: “The National Cycling Strategy finishes at the end of 2016 and there are no plans to develop a future strategy for cycling in Australia.”

Perhaps governments do not want to be reminded that their promises to get more people cycling are empty. They prefer to shut down the messenger rather than address the real problems. Meanwhile increased cycling participation is a cure for road safety, public health, traffic congestion and greenhouse gases but Australian Governments are giving up.

The National Cycling Strategy Implementation Report 2015 demonstrates that despite more cycling infrastructure and government participation/safety campaigns, there are fewer cyclists and more injuries.

The elephant in the room is mandatory helmet laws and it will be interesting to see if the Australian and New Zealand government representatives who’ve received the report will read it or get the hint that helmet laws are harming instead of improving cyclist participation and safety.